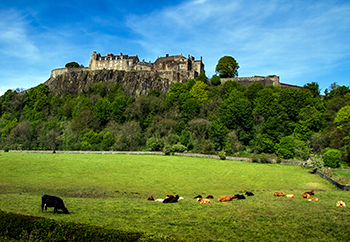 Exploring Stirling has never been easier, and there are a great number of exciting things to see within the city. A humungous example of domineering Renaissance architecture comes in the form of Stirling Castle, situated atop Castle Hill, where visitors have the opportunity to oversee the city and imagine the battles that took place on the accompanying battlefields.

Stirling Castle, home to a range of Scottish monarchs including Mary Queen of Scots in 1542, houses buildings that date from the 15th and 16th centuries and is now considered a Scheduled Ancient Monument. The castle plays host to a number of costumed characters who take on the role of different members of 16th-century life, including court officials, servants and maids of honour.

Perfect for families, a visit to the castle thrusts you back in time and allows you to experience history in all three dimensions, with knowledgeable staff ready to guide and inform and a number of specialised tours available to visitors. The must-visit attraction is suitable for all the family.

For tourists looking for something both distinctive and rich in history then The National Wallace Monument may well tickle your fancy. Overlooking the scene of Scotland’s victory against King Edward and his army in the Battle of Stirling Bridge, the monument has fascinated its visitors for over 145 years and follows the tale of a famous Scottish martyr and patriot, Sir William Wallace.

Built as a way of heightening Scottish national identity in the 19th century, the statue stands at around 67 metres tall; visitors are able to climb towards the crown in the monument’s tower, exploring the national hero as they go. The Hall of Arms depicts the Battle of Stirling Bridge in all its glory and explores how it came about that Scotland was able to claim victory, while the Hall of Heroes tells Wallace’s story. The Hall of Heroes examines his and other Scottish heroes’ contribution to building a legacy for the country that now holds them in such high esteem.